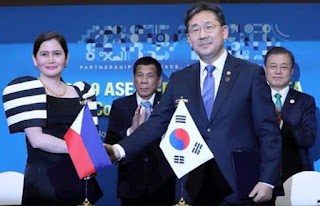 Puyat stated on a speech she delivered during the signing, that South Korea is the top source market in the Philippines for nine years now. Also, she hopes that "we can sustain and intensify the already-strong ties with Korea that we enjoy".

The IPTC aims to introduce programs that will support two-way tourism promotion and also join tourism efforts between the two countries.  In addition, the program will also facilitate more meaningful interactions between Filipinos and Koreans. Also, it will boost over-all cooperation of the two countries in terms of tourist safety, security and quality assurance.

Puyat also stated the different strategies to be able to capture more of the Korean market.


Puyat has noted that the creation of 14 additional flights to the Philippines from South Korea greatly improved the connectivity between the two countries. New routes include Daegu-Kalibo-Daegu, Incheon-Bohol-Incheon and Muan-Clark-Muan.

Furthermore, Koreans visit the Philippines not just for leisure but for education as well. Usually to take up English as a Second Language (ESL).