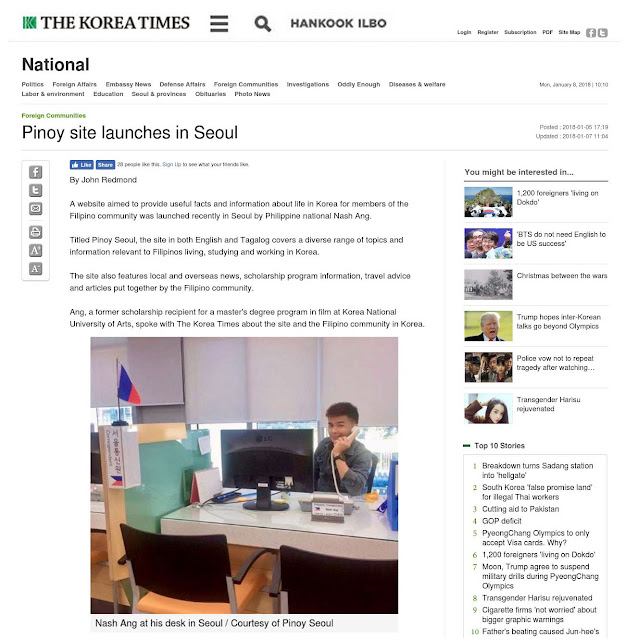 A website aimed to provide useful facts and information about life in Korea for members of the Filipino community was launched recently in Seoul by Philippine national Nash Ang.

Titled PinoySeoul.com, the site in both English and Tagalog covers a diverse range of topics and information relevant to Filipinos living, studying, and working in Korea.

When did you start PinoySeoul.com?

I started PinoySeoul.com while working as an International Correspondent of the Seoul City Government through Seoul Global Center in 2017. Prior to this, I was a scholarship recipient of a master's in film at the Korea National University of Arts and somewhat a successful artist. I traveled to film events across the world, to attend festivals, and receive awards... even to North Korea! When I was assigned to be the eye of the Filipino community in Seoul, I realized I should give back the roots that helped me progress where I am now.

What are your aims for the site?

As a graduate of mass communication from the Philippines, my goal for PinoySeoul.com is to be the main communication bridge between Filipinos to Korea. Korea is not just about K-pop and tearjerker dramas. I want to show what Korea has to offer to hardworking Filipino workers and future leaders. As of now, the website's content caters to Filipinos living in Korea. I plan to expand it to help Filipinos who have an interest in Korea across the world.

How are people responding to it?

For half a year of its operation, the response in the Filipino community is enormous. The PinoySeoul.com Facebook page has more than 5,000 likes, Twitter has almost 10,000 followers and the website itself has an average of 500 visitors a day.

Tell me a little about the Pinoy community.

The Pinoy community in Korea somewhat differs from neighboring Asian countries. We don't have nannies or domestic helpers here. In the early 1990s, there was a surge of Filipino expat entertainers but lifestyle changes in Korea made the nightclub industry less popular. Most Filipinos here are working in a factory, students or women married to Koreans. Approximately 60,000 Filipinos live here which made it Korea's third-largest expat community, next to China and Vietnam.