A Seminar for Filipino Entertainers successfully held in Seoul

0 0 Nash Ang Wednesday, October 31, 2018 Edit this post
Hazel came to Korea from the Philippines on an E-6-2 arts and entertainment visa through an unofficial channel run by third-party recruiters affiliated with neither the Korean nor Philippines governments.

Her first two years as an "entertainer" at a pub in a mountainous suburban region was miserable. She was abused and maltreated by her boss. Hazel eventually ran off and later was saved by one of the pub's patrons. The Korean man, a band vocalist, later became her partner and they started living happily together.

Her story was one of the "successful" ones shared by Filipino artists invited to "The Future of Filipino Artists in Korea," the latest seminar hosted by Pinoy Artists in Korea on Oct. 20. The group is a Filipino-Korean culture and arts organization formed after Philippines President Rodrigo Duterte visited Seoul in June 2018. Pinoy refers to Filipinos in their country as well as those in communities overseas.

Roger Amboy recounted his two decades-long Korean life as one of the first entertainers migrating to Korea in the 1990s. He talked about how he helped make Korean society friendly for not just Filipino artists but also the whole Filipino communities. 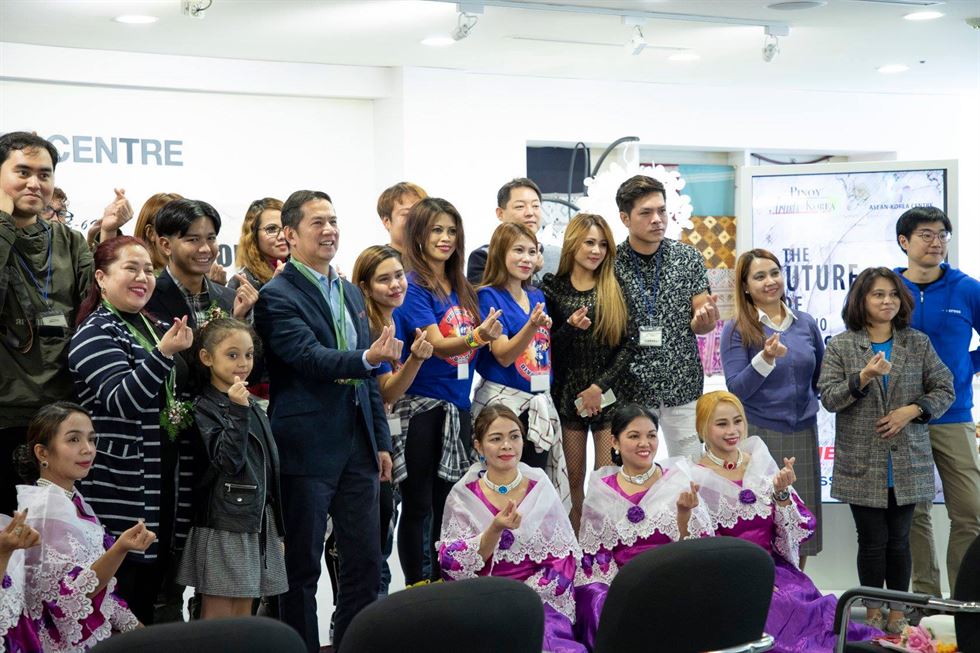 Gil Hizon, one of the "legitimate artists" who went through the screening process by the Philippines government and the country's embassy in Korea, told the audience he first got an E-6-2 visa when he worked at a hotel in Seoul. He then stayed in Korea with the short-term visitor's C visa, changed it to an E-6-1 artist visa sponsored by a Korean theater company, followed by professional D visa and finally a job at an embassy in Korea.

"I am glad that we successfully organized an event to bring forward the issue of Filipino entertainers working in Korea," Nash Ang, the founding director of Pinoy Artists in Korea, told The Korea Times.

Philippines Ambassador to Korea Raul Hernandez reminded artists gathered at the ASEAN-Korea Center in Jung-gu, Seoul, always to have faith.

"Our presence in this world, not necessarily in Korea alone, is not for ourselves alone but for the benefit of others," the ambassador said in the event's opening speech.

"Living your lives only for yourselves is not important and not meaningful either. Life is only meaningful when it is lived on behalf of other people."

Joey Dizon from the Philippine Overseas Labor Office was also at the event. He answered inquiries about the E-6-2 visa that human traffickers sometimes use as a means of entrapment.

Dizon said the visa could be obtained by "real entertainers" through the process with the Philippines government and embassy in Korea, or those who were contacted by third-party recruiters and "slipped through the process of the law just to get the visa and work in Korea."

"The latter group is not monitored by the Philippines government and embassy because they arrived in Korea in a different process, like going as tourists to other countries such as Hong Kong and getting an E-6 visa there and going to Korea," Dizon said. "Because of that, they are prone to prostitution and to abuse of all sorts."

'United we stand in Seoul': Filipino artists look to the future
By Ko Dong-hwan of Korea Times