0 0 Nash Ang Saturday, June 10, 2017 Edit this post
The Philippine Embassy in Seoul invites everyone to join us in celebrating the 119th Anniversary of the Proclamation of Philippine Independence as well as the annual Migrant Workers Day on 11 June 2017 (Sunday) at Banpo Park in Seoul. 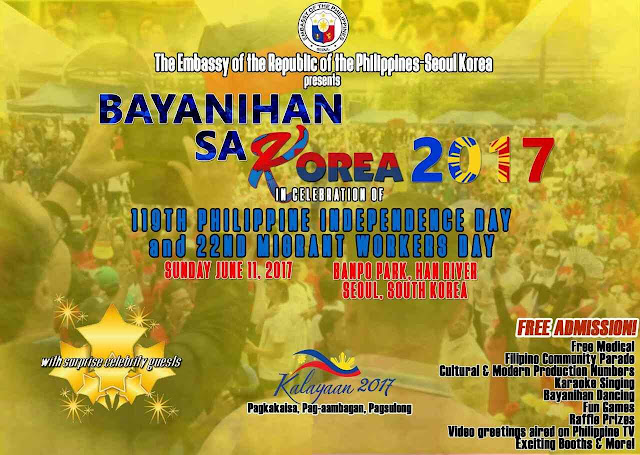 The event will feature performances from local talents as well as guest celebrities from the Philippines. On-site labor-related services will also be available.

Go straight for 250m, and turn right at the Express Bus Terminal 4-way intersection. Continue going straight for 400m and cross the road. Go straight through the underpass to arrive at the park.

Walk straight for about 385m until to reach at Banpodaero four-way Street, then turn left. Continue walking following the main Banpodaero road for about 530m and go straight through the underpass then make another left immediately. Walk pass the parking lot then you will arrive at the park.