Korean Family Dramas to Watch When Your Days Seem Long 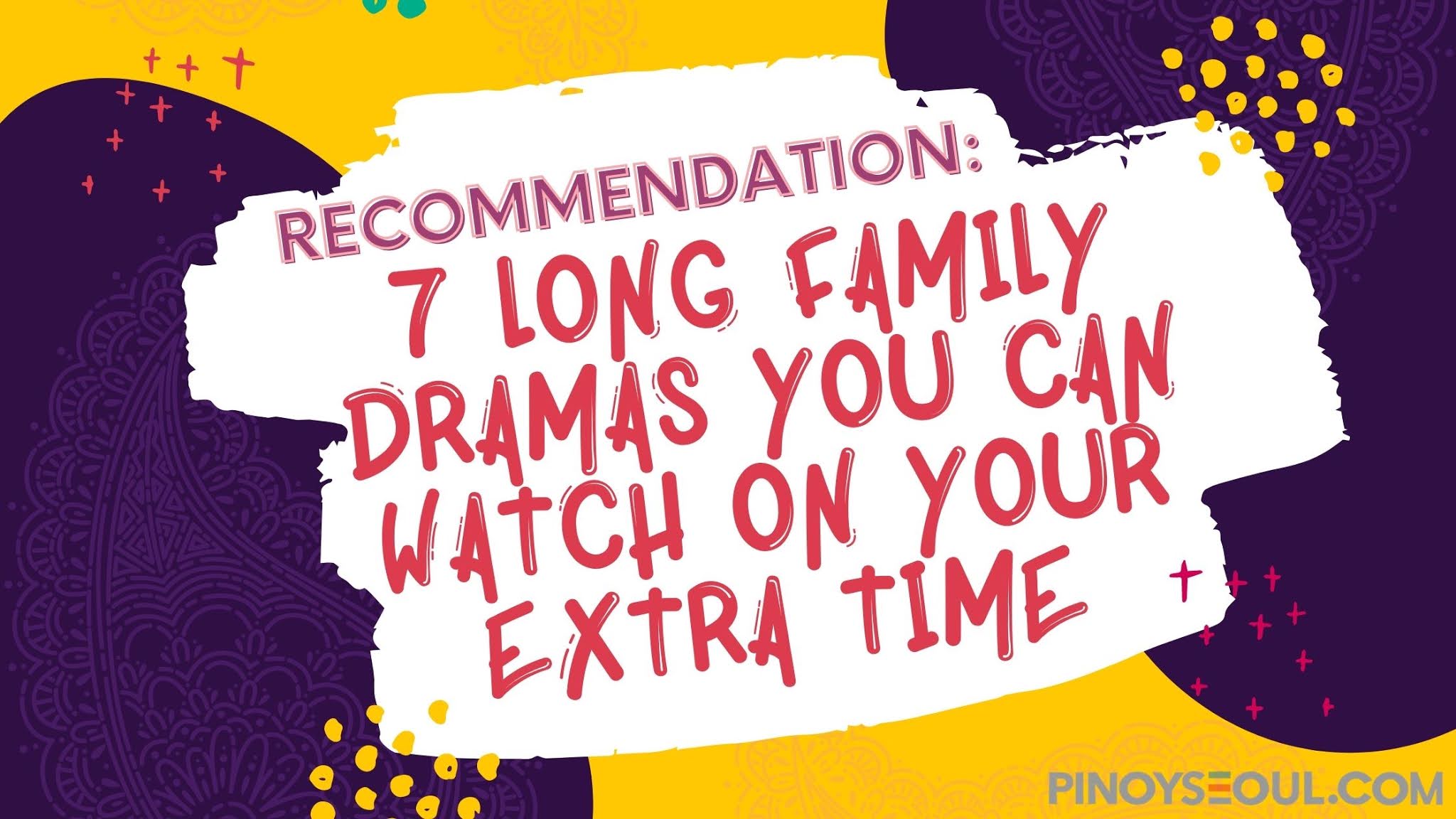 2020 has been a tough year for us. With lockdowns implemented and an enemy invisible from the naked eye everywhere, we have no choice but to stay in our homes. And we all know that the fame of Korean dramas dramatically rose during this time of the pandemic.

K-drama fans’ only wish is to have Moon Lovers: Scarlet Heart Ryeo Season Two but all we got is Enhanced Community Quarantine 2.0. We have been slowly recovering from the aftermath of the first ECQ but another dapttaphan (stuffy) lockdown has occurred to us again.

Since this quarantine is extra time for us again, here are the long family dramas that I recommend for you to watch either during this lockdown or on your extra time.

Synopsis: Cha Soon-bong is a widower who has devoted his life to his three children despite their selfishness and respect. His eldest daughter Kang-shim, after a failed relationship, has resigned herself to never marry and choose a lifetime of being alone; his eldest son Kang-jae, a brilliant oncologist, is resentful of his humble origins; and his youngest son, Dal-bong, unemployed and the most connected to his emotion.
Fed up with his children's selfish behavior, a father sues them for all they've got — and makes them meet a list of his conditions to be a true family. (Source: Wikipedia)

Synopsis: This drama is about a family that lives on the outskirts of Seoul. Byun Han-Soo is the father and His wife, Na Yeong-Shil is a dedicated, responsible mother to his three daughters and one son including Hye-Yeong, Mi-Yeong, Ra-Yeong, and Joon-Young. Suddenly one day, Ahn Joong-Hee shows up at the household and declares that he is the son of the family. Joong Hee is an actor who used to be a member of an idol group. He begins to live with them.

The four siblings bicker with and comfort each other through life's many surprises — including Ahn Joong-Hee. (Source: The Kats Café)

Synopsis: Hae-Kang and Yong -Ki are twins that were separated 30 years ago. Hae-Kang was a happily married lawyer but after her daughter dies her marriage starts to fall apart. Her husband Jin-Eon who is the son of a large pharmaceutical company gets seduced by the poor young and beautiful Seol-Ri and decides to divorce Hae-Kang. Yong-Ki, on the other hand, is a pregnant widow. Her life becomes threatened while trying to uncover the truth behind her husband's death. While Yong-Ki was running away she coincidentally switches cars with Hae-Kang which leads her followers to mistake Hae-Kang's identity so they try to kill her. Hae-Kang ends up losing her memory and lives with Baek Seok who thinks she is his first love, Yong-Ki. Baek Seok's innocence and cheerfulness touch her and she finds happiness with him but when she meets her ex-husband again, her heart starts shaking. (Source: My Drama List)

Synopsis: Geum Sa-Wol is a genius architect who grew up in an orphanage. Despite the hardships she faced while growing up, she always stayed positive and never despaired no matter how tough life became. Her biological mother Deuk-Ye had her through an extramarital affair with an ex-boyfriend and plots revenge on her husband and his mother. After a considerable amount of time has passed, Sa-Wol meets her mother but both of them do not recognize each other. Instead, they get to know each other as mother-in-law and daughter-in-law. (Source: MBC)

Synopsis: Lee Jin-Sook is a speaker on family happiness. However, she has a sad past. Years ago, she was kicked out of the house by her mother-in-law and was forced to be separated from her newborn daughter. She remarried, and when her second husband died 5 years later, she brought up her two young stepdaughters like her own. She was against the marriage when her youngest stepdaughter, Oh Yeong-Chae wanted to marry Kim Hyeon-Tae, a rookie boxer, and an orphan, but she relented. When Yeong-Chae, who was involved in a hit-and-run accident, died after giving birth to a son, Jin-Sook blamed and hated her son-in-law.
After Yeong-Chae's death, Hyeon-Tae and his son stayed together with Jin-Sook and treated her like his mother. When she saw how Hyeon-Tae took care of his son, her attitude towards him changed. Now she treats Hyeon-Tae like her real son.

One day, Hyeon-Tae falls in love with a woman named Park Soo-Kyeong. Jin-sook, who is unhappy with Soo-kyeong, finds out that Soo-kyeong is her real daughter. Although she is eager to reunite with Soo-kyeong, she is in a dilemma as Soo-kyeong hates her birth mother for abandoning her. Hyeon-tae finally marries Soo-kyeong, but it also causes conflicts.
(Source: Wikipedia)


Synopsis: 25 years ago, the Haesung group lost their granddaughter, Choi Eun-Seok. The girl was found and raised by Seo Tae-Soo as one of his twin daughters, Seo Ji-Ahn and Seo Ji-Soo, They grew up rich but their father bankrupted and they had to experience the hard life of a dirt spoon. Ji-Ahn now is a contract worker at Haesung group who would do anything for a job while Ji-Soo is an air-headed part-timer who has a one-sided crush on Sun Woo-Hyuk, Unknown to her that Woo-Hyuk was in love with Ji-Ahn in high school.

Choi Do -Kyung is Haesung Group oldest grandson, he is gentle and kind but being too good yet still single makes his employees spread weird rumors about him, he meets Ji-Ahn in a car accident and comes to know her sad situation but his biggest shock is when his mother reveals that his lost sister is Ji-Ahn.
(Source: Asian Wiki)

And last but not the least and my favorite of all;

Way long, before the fame of the highest rating infidelity drama, “The World of the Married” came to spotlight and took over the whole Korean drama industry, K-drama titas and titos had Marcel, Angeline, and Heidi (Tagalog-dubbed names of Jung Gyo-Bin, Goo Eun-Jae, and Shin Ae-Ri) who tested the patience and ignited the anger of fans of this drama.

Synopsis: One night Goo Eun-Jae got drunk and Jung Gyo-Bin took this opportunity to take advantage of her. Eun-Jae and Gyo-Bin got married but their marriage is not a very blissful marriage. Eun-Jae's best friend, Shin Ae-Ri, openly flirts with Gyo-Bin in front of Eun-Jae. Gyo-Bin decided that he did not want to remain married to Eun-Jae and tried to kill her. Eun-Jae was presumed to have drowned and died. Gyo-Bin thought he was successful in killing Eun-Jae and moved on with Ae-Ri. Months later, Eun-Jae is back for revenge but she assumes the identity of another woman, Min So-Hee, who had killed herself. How will Gyo-Bin react to a girl who looks exactly like his presumed dead wife, Eun-Jae? Will he be tempted by So-Hee?

Despite all the controversies it faced, it still remained the highly watched Korean drama of its generation. China and the Philippines had remakes of the series.