Going Beyond “Oppa,” and “Kimchi”: Korean Language, Anyone? 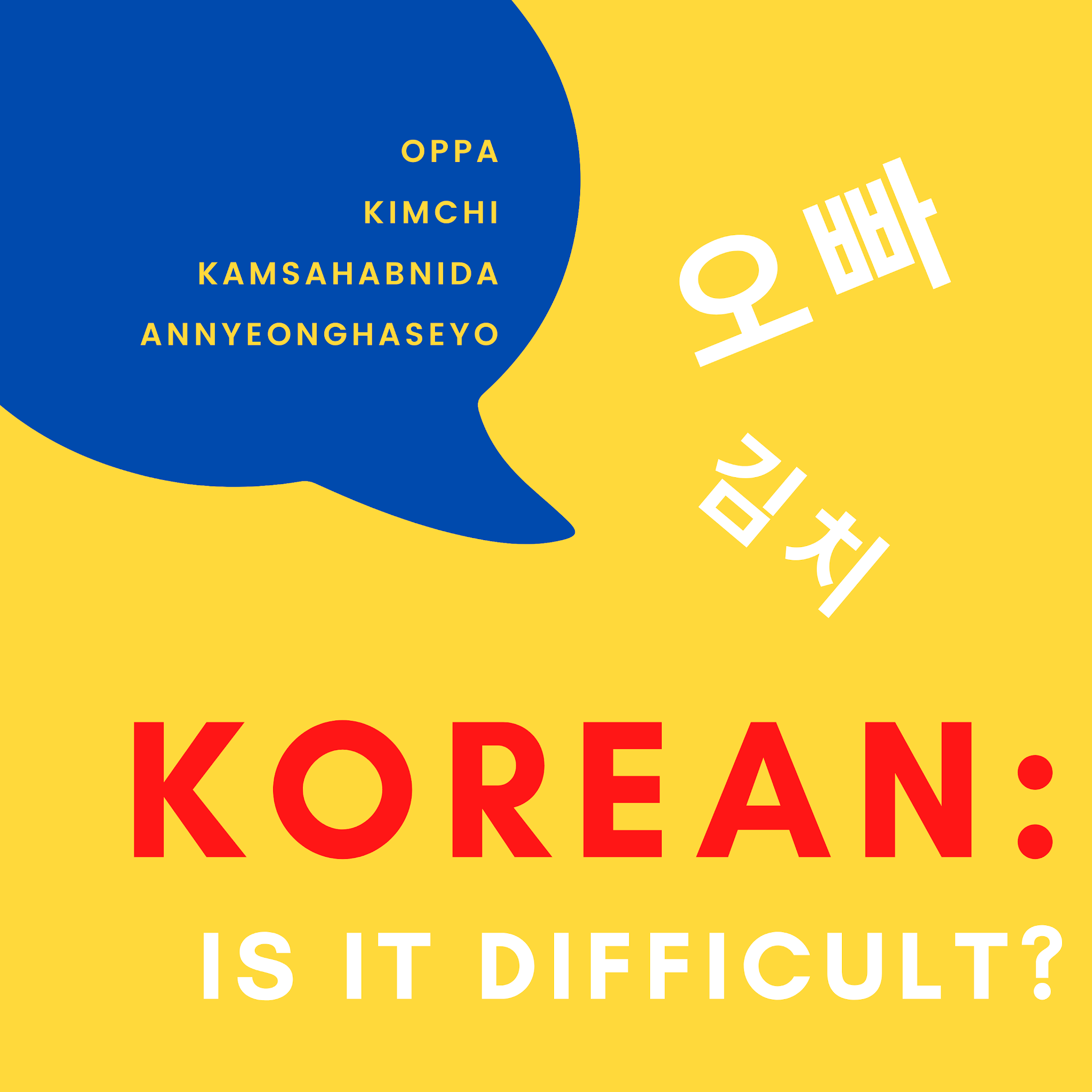 I’ve been asked if the Korean language is difficult to learn.

Yes and no. That’s a straightforward answer from me, a relatively new student of the Korean language.

Yes, it is hard to learn. First, you have to familiarize yourself with Hangeul, the Korean alphabet system. Then you have to know how to write each letter (jamo) properly. Next, you have to memorize the sound that represents each character. It’s like decoding a series of codes. If you’re someone who likes to solve puzzles and untangling riddles and clues, then connecting the characters will be easy for you. In any field of study, there is a learning curve before one can be called an expert. Keep that in mind as you patiently journey with studying the characters.

On the other hand, it is not difficult to learn once you get the hang of it, especially when you become at home with the letters. As in any language, the secret lies in reading and enriching your vocabulary. Set a goal per day. For instance, memorizing one new Korean word a day (written in Hangeul) would be a good way to start. Another huge advantage of Hangeul is that it’s phonetic. There is no hidden sound that you have not known before in the English system. Unlike in Chinese, each Korean word or letter block is pronounced without tones.

If it’s any consolation, there are only 24 letters in the Korean alphabet, two letters short of the English counterpart. Compared to the languages of its East Asian neighbors, China and Japan, Korea’s Hangeul will not leave you with thousands of characters to memorize. The 24 letters include the 14 consonants and the 10 vowels.

The fourth king of the Chosŏn dynasty, King Sejong, developed the Hangeul alphabet. The letter system became the official writing system for the Korean language in 1446 under his decree. It was only after 1945 when Hangeul was used mainstream because previous Korean elites were highly influenced by Chinese and Japanese language systems. (Britannica.com)

While studying Korean, I learned that there are English words incorporated into their language. I spelled in Hangeul words such as coffee, coffee shop, cinema, camera, bus, juice, mask, television, computer, etc. Konglish (Korean + English) is commonly used. Same as in Taglish (Tagalog + English) for the Filipino language. Hybrid words are not rare occurrences in any languages, I think.

What I also notice as I study Korean is its high emphasis on courtesy in conversations, whether written or spoken. The verb conjugation would depend on who you speak to or who you are addressing, in the case of written materials. The first level of conjugation begins with the “informal high” politeness/tense level. The formal versions that end in “imnida” or “sumnida” will be useful in job interviews, presentations, or newscasts. But for day-to-day interactions, it’s usually the “yo” form (like the very familiar, annyeonghaseyo, or how are you).

Sources for the Korean Language

With hallyu (Korean pop culture wave) permeating almost every country in the world, it is easy to find resource materials to learn Korean.

One of the helpful free sites for language learners is Duolingo. It tracks your progress and inspires you as you climb up the charts against the other learners. Some international universities and colleges accept the Duolingo test as proof of proficiency.

In my case, I sought the help of a Korean language teacher and I study online twice a week. I used to do it thrice a week but our schedules became a bit tight. It helps that aside from the reading materials, practicing through actual conversations contributes to your progress.

There are various reasons according to one’s goals. As for me, I decided to study Korean because I am a lover of language. I studied French and Spanish. So I thought to myself that it would be good to learn another Asian language apart from mine. Coincidentally, I’m swept by hallyu, particularly by the K-drama fever. That gave me further drive to study Korean. Another reason is that I’m planning to go to South Korea after the pandemic to finish the sequel to my second book, Life in Lockdown: I Caught the K-Fever (The First Wave). It would be truly beneficial if I know how to talk to the locals as I traverse its cherry blossom-adorned roads.

I don’t intend to take TOPIK (Test of Proficiency in Korean). Not yet. I’m not aiming to use my knowledge of Korean for a far serious objective, like work. But who knows, soon I might take TOPIK, too.

I’m far from being a fluent Korean speaker. But I can go beyond saying “oppa,” and “kimchi.” I can understand and utter simple sentences now. It takes a lot of dedication to be called an expert in this language especially for a foreigner like me. My progress in speaking and writing levels is up to me. I keep thinking: “No pressure. Just enjoy the ride.” After all, 나는 거기에 일거예요 (“I will get there”).

·        The direction of Korean writing until the 1980s was usually from right to left in vertical columns. Since then writing from left to right in horizontal lines has become popular, and today the majority of texts are written horizontally.

·        The shapes of the vowels are based on three elements: man (a vertical line), earth (a horizontal line), and heaven (a dot). In modern Hangeul, the heavenly dot has mutated into a short line.