Crash-Landing on the DMZ? Here are Some Travel Notes

The scariest place on Earth is the DMZ. That is according to former U.S. President Bill Clinton when he visited the Korean Peninsula in 1993. There’s a certain enigma attached to that acronym which means “Demilitarized Zone.”

A more-or-less accurate look into the life near the DMZ was given to viewers of the K-drama hit Crash-Landing on You. Others thought of putting the DMZ in their bucket-list of destinations. Here’s a briefer on what to expect.

Not your average tourist destination

Despite its reputation, the DMZ, an isolated stretch of land 160 miles long established in the 1953 Korean War Armistice Agreement, is surprisingly a tourist attraction. Before the pandemic hit, the DMZ welcomed 1.2 million travelers each year based on the Korea Tourism Organization data.

However, a traveler must note that there is no direct way to travel to the North coming from the South and vice versa. The border between them is closed. Therefore, one must transfer to another country first to directly fly to North or South Korea. The usual third-country transfer is China or Russia.
The DMZ is a four-kilometer border barrier serving as a buffer zone between North and South Korea (two kilometers into North Korea and two kilometers into South Korea). The Military Demarcation Line divides the two. No soldiers are manning the DMZ (except in the Joint Security Area), but both sides of the four-kilometer area are the most heavily armed places in the world.

In North Korea, Panmunjom, and the Concrete Wall Observation Post are the two major points of interest within the DMZ. The South Korean side of the DMZ features several parks, observation towers, museums, and several itineraries for tourists. The tours would present contrasting lives between the two Koreas: the modern cities and cars of South Korea on one side, and the other side, the rugged landscapes of the North teeming with greeneries and occasional sightings of white cranes, eagles, bears, goats, or deer.

The South and the North forces jointly guard the Joint Security Area (JSA) located inside the DMZ. They are not allowed to cross the demarcation line.

Panmunjom is the most-visited part of the DMZ. Now an abandoned location, Panmunjom used to be a village between Kaesong and Seoul on the de facto border between North and South Korea. The 1953 Armistice Talks was held in Panmunjom.

The Central Conference Room or the blue houses are one of the main attractions in Panmunjom. The one-story tent-like structures are painted blue and are the venues for occasional meetings between North and South Korean officials. Tourists may walk around the conference room and may hop from South to North. Leaving through the other exit is not allowed.

Photo: KoreanOnlineVisa.com
South of the Military Demarcation Line is a concrete wall spanning more than 149 miles from east to west. The U.S. forces built this wall from 1976 to 1979. It stands surrounded by barbed wires, gun ports, and guards. 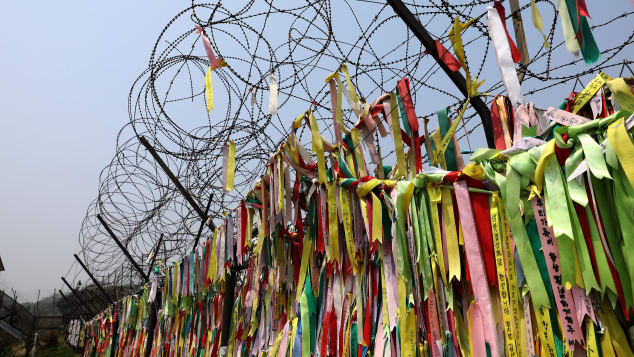 The DMZ has rules for visitors. On both sides, and at all times, travelers must be with their tour guides and military escorts. Tourists need to sign a form that indemnifies authorities in case of any untoward incident, such as chancing upon a landmine! Yikes!

Make sure that before you travel, do your research. Ask around for more tips from those who have been to the DMZ. Because you are not Yoon Seri who has Capt. Ri for salvation, just crash-landing is not an option. 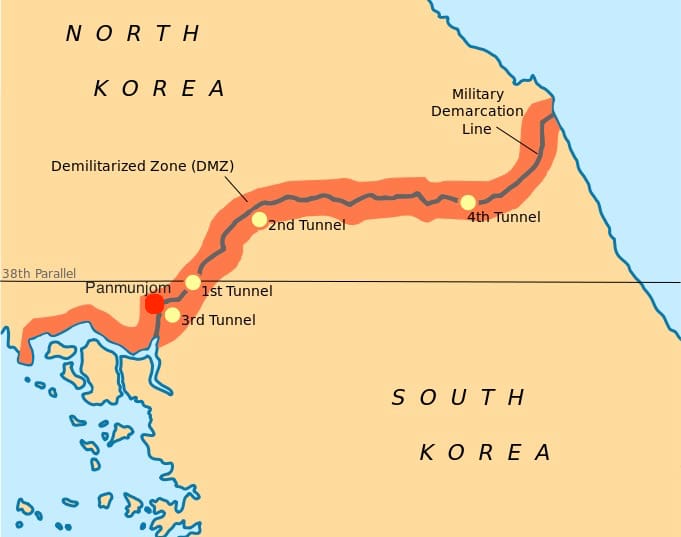