10 Hilarious Korean Variety Shows That You Must Watch 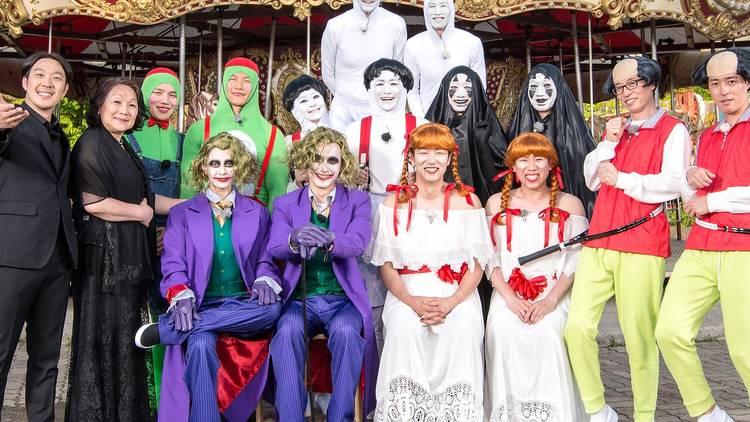 With this pandemic happening all over the world, you just wanted to find any ways to divert your attention and ease your mind a little bit. From movies to music to dramas, it seems that the whole universe is gushing over anything Korean nowadays. If you're in the mood to laugh until tears form, we turn to another genre of Korean TV entertainment: variety shows! We swear, they're proven to help you forget 90+ percent of your problems and if you are looking for some fun shows that can entertain you to the fullest, these are just perfect for you. 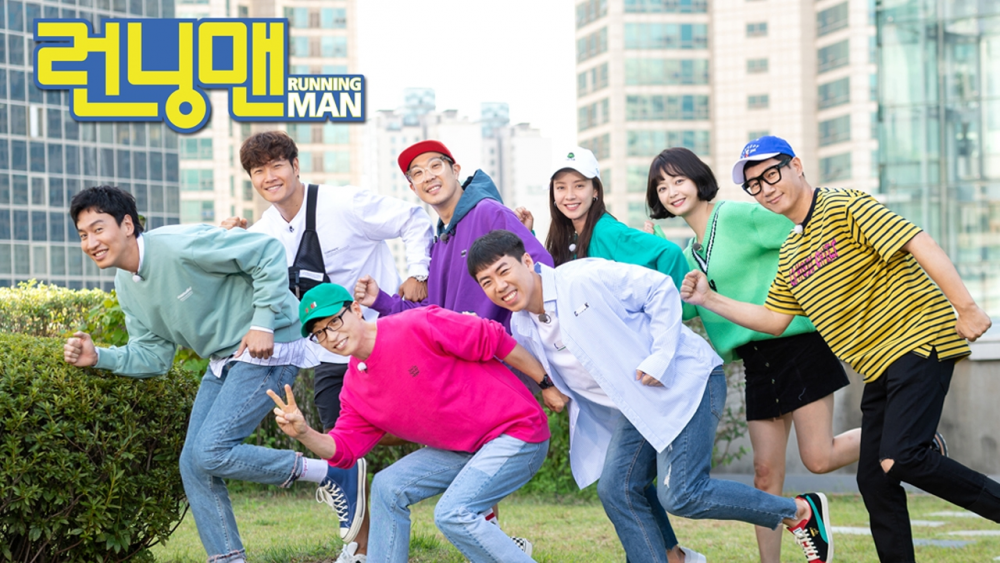 allkpop
Running Man is one of the longest airing variety shows in South Korea. With a non-stop run for more than 500 episodes, who would believe that Running man is already celebrating a decade of laughter! No wonder it's the crowd's favorite for its super fun and crazy missions for the hosts (Yoo Hae Suk, Haha, Ji Suk Jin, Kim Jong Kook, Song Ji Hyo, Lee Kwang Soo, Jun So Min, and Yang Se Chan ), along with guests, to compete and win the race. And it's not just popular in South Korea, but also around the world. From a daring mission on the infamous Nevis Swing in New Zealand (it's a giant swing on the edge of a cliff) to hilarious, nonsensical games, this show will have you in fits of laughter even if you don't understand the language. Having welcomed some of the world's biggest stars to the show, including Ryan Reynolds, Stephen Curry, and even Tom Cruise, Running Man is the perfect entertainment for any day of the week if you're in for tummy aching laughter.

New Journey to the West 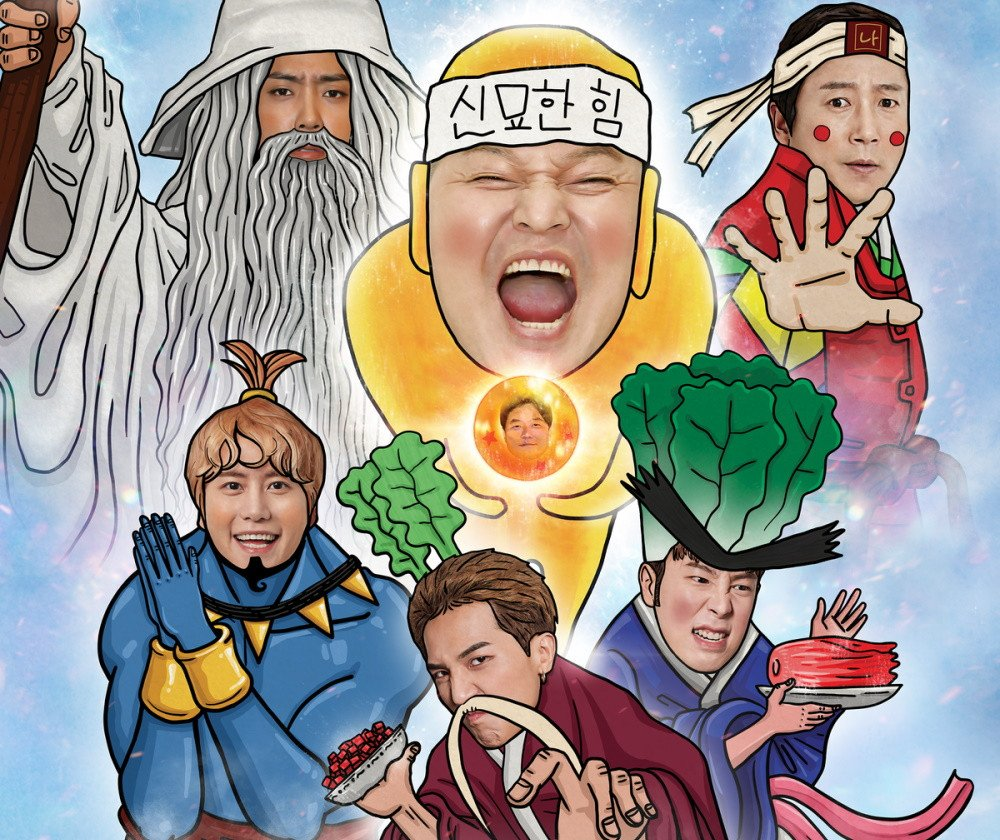 allkpop
New Journey to the West is one of those shows that are just plain hilarious, no questions about it. Inspired by the famous Chinese novel Journey to the West, the show's premise revolves around the seven mystical Dragon Balls that have landed in different places on earth (the story of how it happened differs every season). The cast must travel around the world to retrieve them back, through games and challenges that will make you laugh because of how ruthlessly competitive the cast members are. And just to top it off, each season is divided into different themes where the cast has to dress up in ridiculous costumes that actually have nothing, or at least, very little to do with the show. Have you ever seen a panda, the Statue of Liberty, and Santa having dinner together? Isn't it just hilarious?

Two Days and One Night 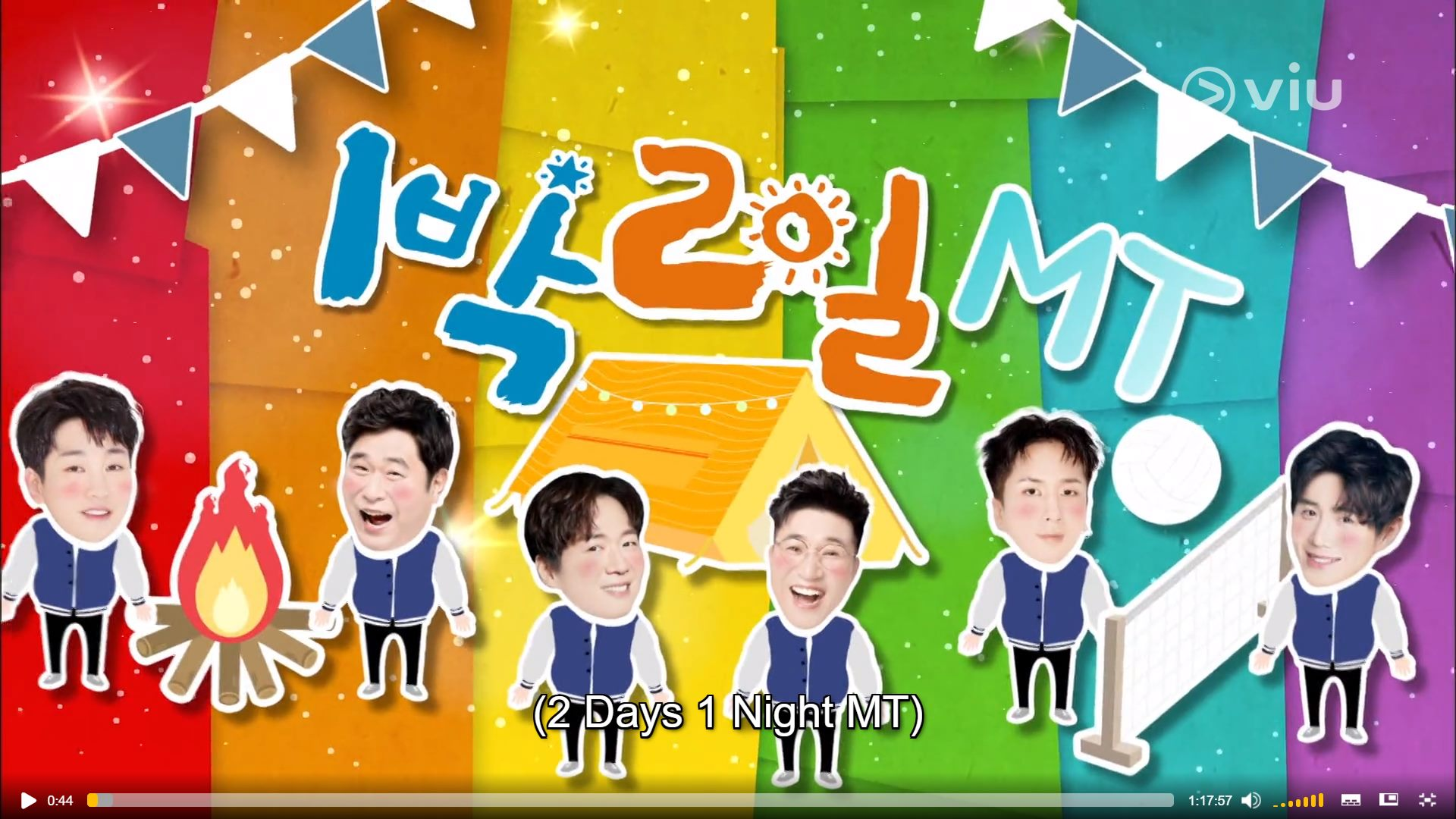 facebook.com/1night2days.allseason
If you need a tour to see the beautiful places in South Korea, this show can be perfect for you! Be guided by handsome actors, singers and, of course, comedians. The show is back with a whole new set of hosts (except Kim Jong-min, an original member). Just like how it started, the show takes its members around the country for two days and one night to explore beautiful towns, villages, and sights under a different theme each week. But this show will not be fun without some cruel, but hilarious games, of course. Famous for its 'lucky or unlucky' games that, should the members fail, would leave them unfed, jumping into frozen lakes, and sleeping in cardboard boxes or just a sleeping bag in the middle of winter. If you love traveling, getting to know local culture and flavors, and the great outdoors, this is the one for you.

The Return of Superman facebook.com/The Return of Superman Fanpage
This show can surely help you relieve your stress. Starring a handful of celebrity dads and their cute babies you just can't help but make “gigil.” The show documents the everyday lives of these families, and what happens when mum's not home (hwaiting appa!). Dads get lucky if they are able to get help from ahjussi or ahjuma, samchon or sungmo, or maybe we're lucky if it's oppa too. If you just enjoy watching adorable children get up to no good, we guarantee you'll fall in love with this show. 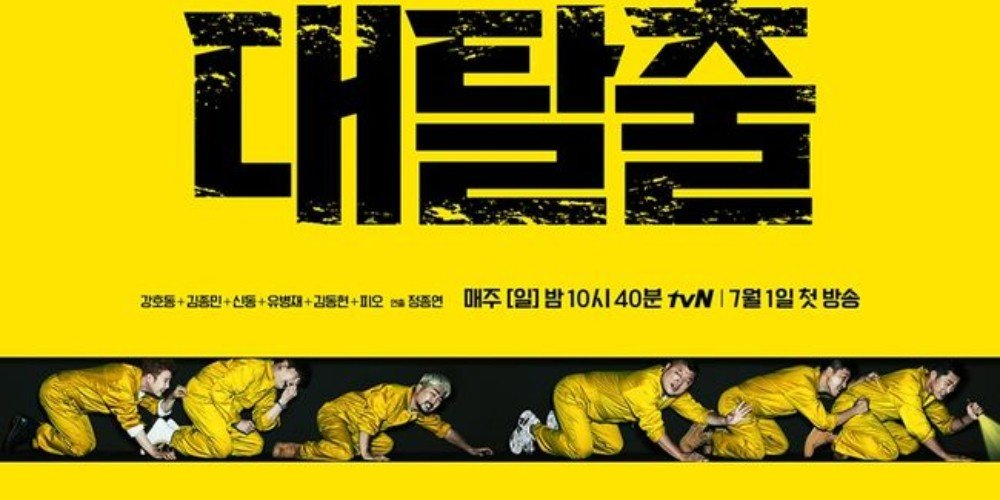 allkpop
If you're in for some challenges this show is perfect for you. Combining escape rooms and mind-boggling puzzles together with mysterious storylines, jump scares, plot twists, six hilarious celebrities (who are all way too jumpy for their own good), and lots of zombies. Great Escape has the ultimate recipe for a successful variety show. Each challenge has a different theme, and members will learn about the context of the background story from the clues during the exploration. Whether it's escaping the zombie apocalypse, killing demonic entities in a psych ward, or finding their way out of a haunted mansion in complete darkness, the show will keep you on your toes every episode. 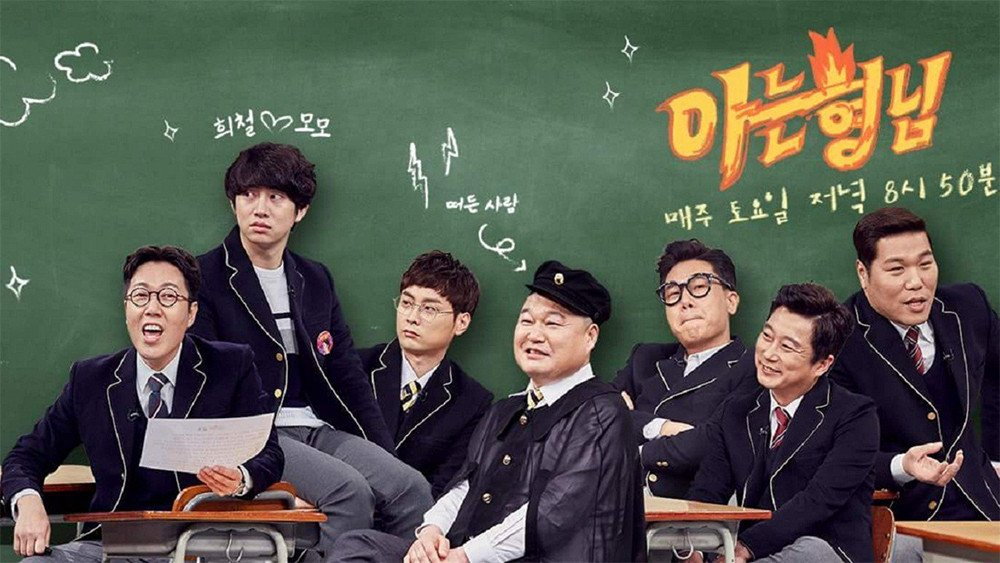 allkpop
For those who love everything about K-pop and K-drama, you're going to love Knowing Bros (also known as Men On A Mission, and Ask us Anything). It is set in a (fake) school classroom with hosts Kang Ho Dong, Seo Jang Hoon, Kim Heechul, Kim Young Chul, Lee Soo Geun, Min Kyung Hoon, and Lee Sang Min. Different guests would appear each week as new transfer 'students' to which the hosts would welcome with quizzes and games. The show is different from others in this list as everything happens within the classroom, but the hosts' undeniable chemistry and savage wits are the main attraction here. Plus, you'll get to see all your favourite K-stars singing, dancing, and showcase their “hidden” talents on the show.

Master in the House 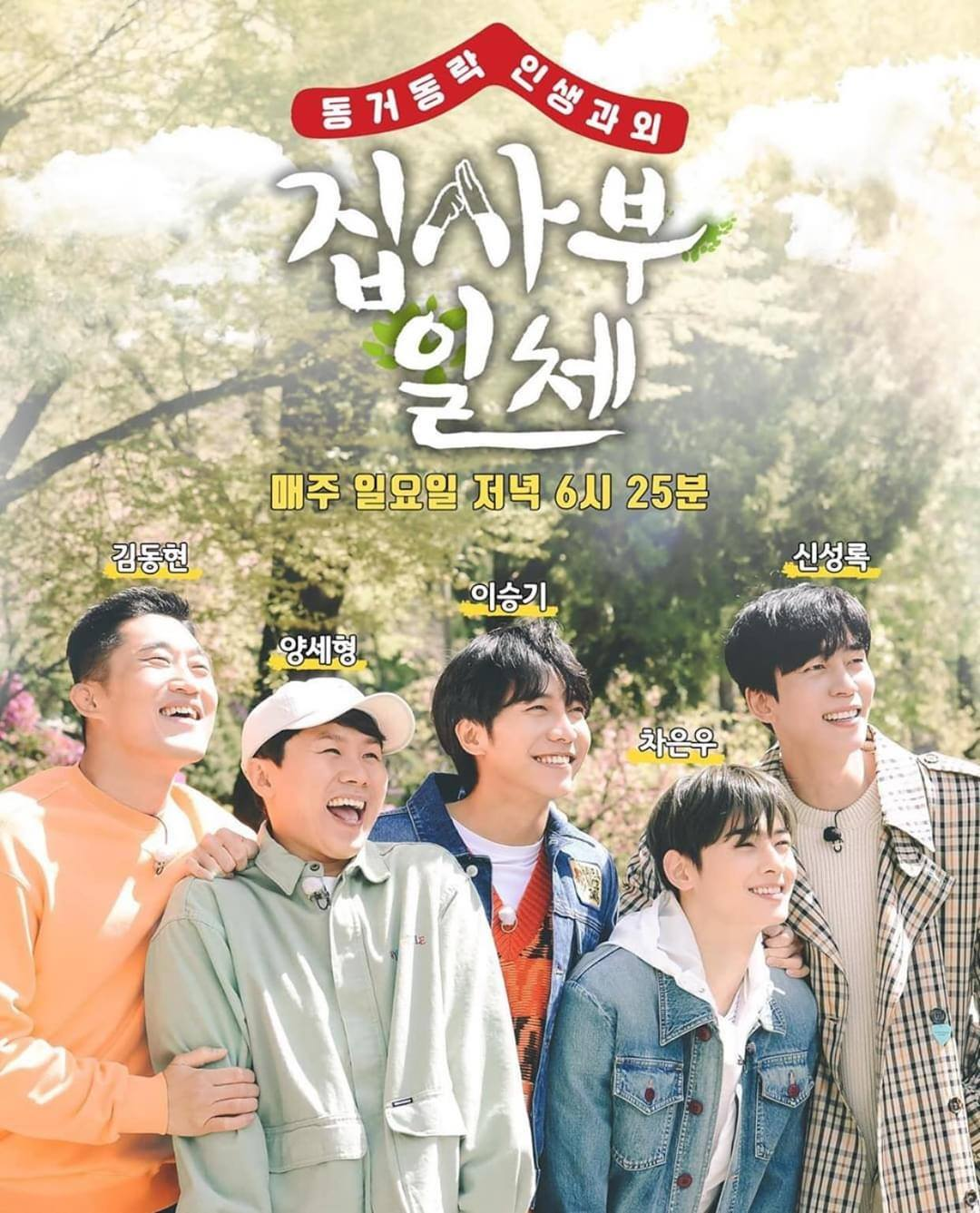 facebook.com/GiaAllana
When newfound friendships are formed, wisdom is gained and, of course, don't forget about the fun. This show allows the cast members Lee Seung Gi, Shin Sung Rok, Yang Se Hyung, Kim Dong Hyun and Cha Eun Woo to know each other as they spend two days with their “masters” (firefighters, award-winning actors, Olympic champions, and even a Buddhist monk) and learn about their daily life. At the end of the second day, there will be a large showcase or challenge that the hosts will have to complete. These hosts are given less than 24 hours to learn a completely new skill every week. The show's insight into the country's different jobs and industries also make it pretty entertaining and for sure you will learn something, too. facebook.com/MooMoo.Garden
Ever wondered what your favorite celebrities do at home when they’re not in front of the camera? Sure, there are still cameras in this show, but I Live Alone gives you a glimpse into the normal and daily lives of celebs! Witness them in their truest selves,how they sleep in bed, morning routine—imagine seeing them in their bare face as they make coffee, cook their meals, do the laundry, and vacuum the floor—all on their own! What makes this fun too is you get the chance to see their cute little pets and, of course, celebrity friends! Perfect to watch while sitting on the sofa on a weekend if you don't have a date.

Law Of The Jungle 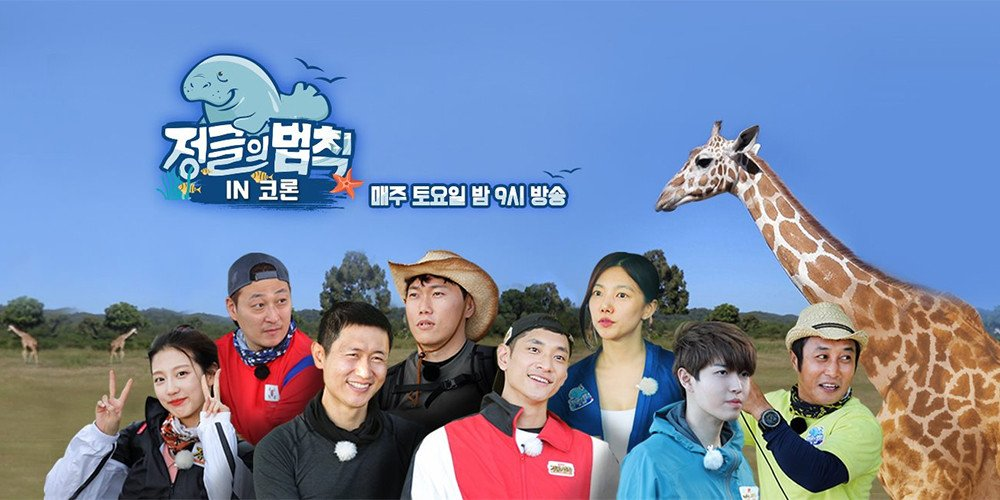 allkpop
If you're in for some tips on how to survive on an island, then this show might be perfect for you. When Korean stars live in the wild, it’s sure to be one wild and crazy ride! This show reveals another side of our favorite K-pop idols and actors, as they find ways to live in the jungle and learn how to survive—from building their own shelter from scratch to looking for food to eat. You would never imagine your favorite K-pop idol doing this. FACT: Did you know that some of the cast members even filmed in the Philippines before? No? Then The Law Of The Jungle is one survival show you should add to your list. I can guarantee you might end up starting to plan your next island trip. 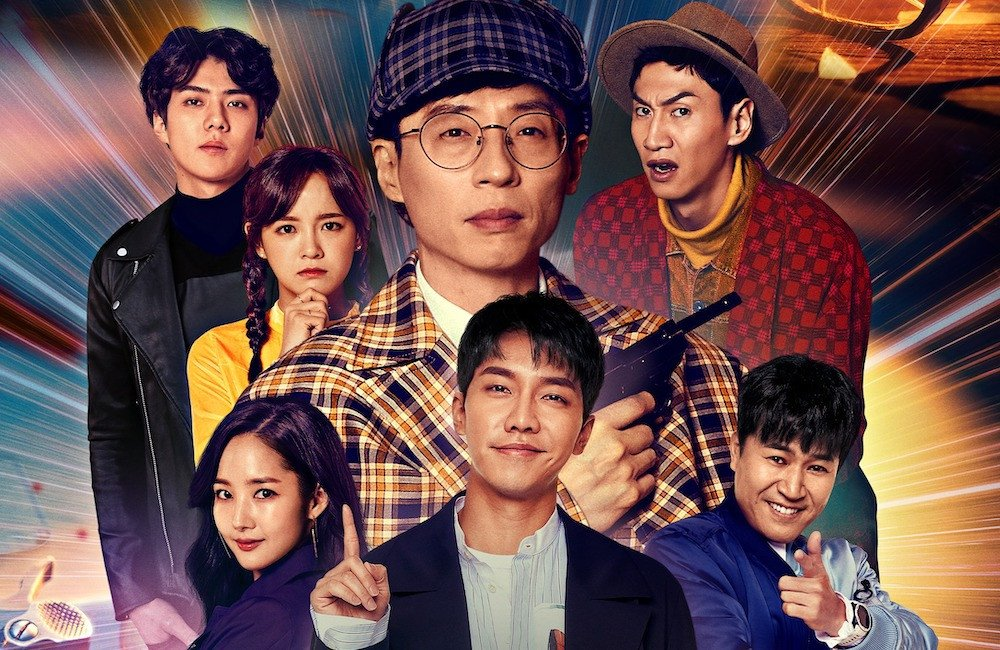 allkpop
Solving crime and mystery, here’s a variety show that will make you think and crack even the inside of your brain. It's a mystery-themed program where the cast members Park Min Young, Yoo Jae Suk, Ahn Jae Wook (until Season 2) Kim Jong Min, Lee Kwang Soo, gugudan’s Kim Se Jeong,  EXO Sehun and Lee Seung Gi (joined the show from season 2, episodes 5-10 and became official member ) become detectives, and solve mysteries together instead of competing against each other. And you know when Jae Suk, Kwang Soo, Kim Jong Min combined? No episodes that you will not laugh until you cry and your tummy starts to have cramps.
Source: Best and Hilarious Korean Variety Shows