Vincenzo: The Dark Comedy We Needed!

With the genre labeled as "dark comedy," what can we expect from this new Korean drama of Song Jong Ki? 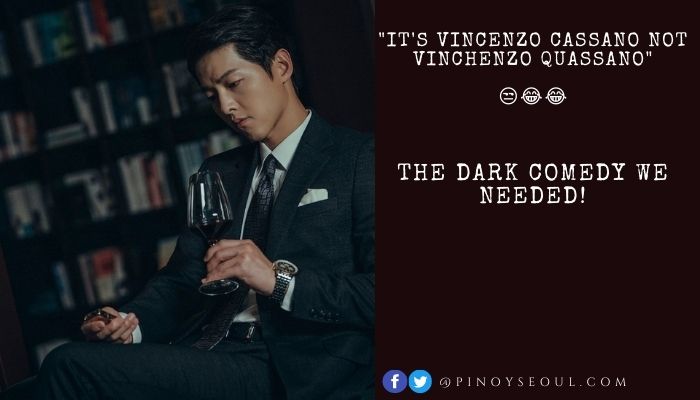 The first scenes from the first episode of Vincenzo already scream action! Who else on earth could have plotted revenge by burning a vast vineyard? Good lord, whatever happened to those precious grapes! And yes, we have seen a lot of attractive villain-like as the main lead but the charisma of this Italian-named Oppa is certainly on a different level that even the gates of Shangri-la would willingly open their door to welcome a new tenant.

But just as he breathes the fresh air of his home country, the young lawyer encountered an unfortunate fate at the hands of the con artists who took his valuables leaving him the only choice of cursing the culprit from afar. His life was suddenly twisted as required by his plan to destroy a building (where, fortunately, disguised as an old treasure chest for a shining shimmering thing called "gold!") and at that very moment, the dark humor was just added like a condiment in our favorite ramen - to get the perfect taste that we all love!

It is now becoming common to Korean dramas where the main lead, even with his dark character, must possess good humor. And the expression of humor differs from what we all used to see. It's bizarre how the character gives us a laugh without the effort of distorting faces of expression but enough with just their dashing looks being caught up in the hilarious situation to reveal their waggish side. Not to mention the tenants of the building where he hid the treasures are with perfect characters. Their stories and attitudes matched the prerequisite to create an outstanding output. If I were to live in that building, I am sure to make acquaintance with all of them since I am a person who loves diverse attitudes or rather said weird ones.

The counterpart female character of Jeon Yeo-been has also played a vital role in rousing the aroma of romance. Of course, romance will always be essential but the kind of unadulterated one is somehow the most reasonable thing to convince even an unaromatic person to watch this drama. The visual of the main characters are undeniably matched to the characters they are portraying. One of the so many reasons why I admire this drama.

If you already watched the two episodes of Vincenzo, I am certain that you would agree with my point of view that the background music played during those captivating scenes has made the drama more appealing and exciting as it helps elevate the vigor we are feeling towards the character. The sound of the violin, which mostly signifies romance, has been effectively used now to stir emotions of hatred, fear, rage, and grief. This sound is not just to add quality to the scenes, but I have proven that this sound is made for the audience to feel the emotions. And seeing Vincenzo Cassano in his ferocious expression while the violin is playing, is somehow the most beautiful thing to see.

And to conclude, I best describe Vincenzo Cassano as someone dark, deadly but unnaturally comedian!

(1) Vincenzo was recorded as the third-highest premier rating drama in the history of tvN!