0 0 Myka Louise Gamez Wednesday, February 24, 2021 Edit this post
Co-ed groups, one of the rarest in the Korean music scene, are both a threat and a curse to the industry. It’s been ages since a successful mixed-gender group is seen and heard that it became taboo in the industry. Some of the known co-ed groups of the past are Roora, Koyote, and Cool. Now, why does it seem like mixed-gender groups do not seem to last long in the industry? Might it be because of how people viewed them or perhaps the speculations that circulate or relationships that might occur in the group? Let’s see.

As the rise of most K-pop groups became global, DSP Media announced on December 01, 2016 the “KARD Project," a surprising mixed-gender group composed of two male and two female members. As each member is introduced to the fans, the idea behind their group name is revealed as a play with playing cards. BM as the king card, J.Seph as the ace card, Somin as the black joker, Jiwoo as the color joker, and D for the hidden card that soon became their fandom name as well.

They started with a three single project, with their hit single and first release “Oh Na Na” that captures the heart of whoever hears it. As soon as the song was released, the group already gained fans and love from all around the world as they are also included as one of the most promising groups of 2016 with just one pre-debut single. With their success, the group pushed through with their two other singles “Don’t Recall” and “Rumor” both songs trended with their catchy tunes and it shows with the views and their ranks in local and international charts. And right even before officially debuting, they already got successful tours around Europe, South America, and Latin America.

With such amazing and promising potential, the group finally gets to officially debut on July 19, 2017 with their title track “Hola Hola,” along with their extended play (EP), their three single project songs, a cover song, and a new song dedicated to their fans. The views of their music video also soar high as their popularity. They are also included in “The Top 5 K-pop artists to watch in 2017.” Such an astonishing record before and after debuting, they have proven that they are, indeed, a force to reckon with.

As the group continues to gain popularity and love from the world, each of their releases is, indeed, refreshing and must be heard and watched. With the success of their debut, they consistently released high-quality music with the EPs You & Me(2017), Ride on the Wind(2018), and Red Moon(2020). They also released two digital singles in 2019: “Bomb Bomb” and “Dumb Litty.” And their most recent release, their first single album “Way with Words,” would probably be their last release as a group, temporarily, due to one of their members recently enlisting in the military.


As they wait for J.Seph to finish his mandatory military service, according to the remaining members, they might try releasing solo or unit music for the fans and would come back as a group once J.Seph is officially discharged in April 2022.

KARD has proven their force to the K-pop industry, breaking the curse on mixed-gender groups and setting their name on stone as one of K-pop’s most dynamic group. KARD as a group, as artists and their musicality, is a spectrum of colors. It always fascinates me how four totally contrasting members of a group can create a synergy that makes them so different yet it feels like watching and listening to a perfectly puzzled cube. All four of them having different styles when it comes to music, dancing, and even fashion can be united to create music that heals and hypes up whoever hears it. They are also known for being real and how they always interact with their fans. Apart from being a group they are also known to radiate a strong sibling/s vibe. Their playful vibe may radiate on them off stage but once they are on stage their unbeatable stage presence along with their talent is truly a scene to behold. The group is considered as one of the complete packages, every member always makes sure that they are involved in making their music releases especially the male member with J.Seph as a lyricist and BM as a self-taught producer. KARD, the group that breaks not just the music charts and scene but they have also broken a long time curse amongst mixed gender group. 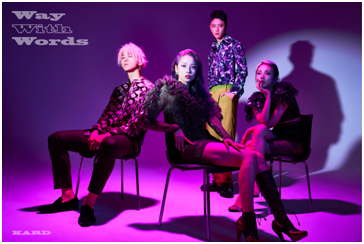