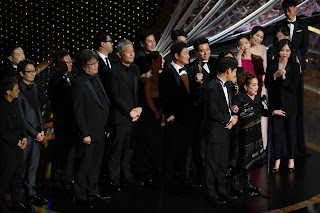 The movie had the most wins for a single movie, including the top awards.

This is the first ever non-English movie to win the Academy's highest award. It won over other nominees 1917, Ford v Ferrari, The Irishman, Jojo Rabbit, Joker, Little Women, Marriage Story and Once Upon a Time in Hollywood.

In fact, only 11 non-English movies were ever nominated for the Oscars; 6 of which were also nominated for Best Foreign Film (now the Best International Feature Film) category.

When the producer Kwak Sin-Ae received the award, she happily stated that.

I’m speechless. We never imagined this to ever happen, we are so happy. I feel like a very opportune moment in history is happening right now. I express my deepest gratitude and respect for all the members of the Academy for making this decision.

Congratulations to Parasite. This win may pave the way for future international and non-English films to be recognized by the Academy.