No, we don't have any Filipino yet positive for COVID-19. We have one in Singapore, we have two in UAE, and we have one in Hong Kong.

Meanwhile, Consul General Christian de Jesus said that there is no report on this have been received by the Philippine Embassy in South Korea.

The Department of Foreign Affairs in Manila says there is no travel ban to South Korea for Filipinos. This is despite the increasing number of Covid 19 infection cases in the country. 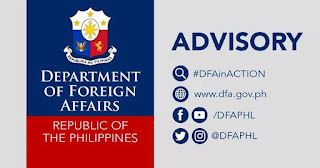 DFA released a statement on Sunday, February 23, stating that it has already coordinated with various Filipino communities in South Korea. Also, the Embassy of the Philippines in Seoul has advised our fellow Filipinos to follow the health advisories given by the Korean authorities.

As of Monday, February 24, DOH has stated that a Filipino has already been tested positive for the virus. Maria Rosario Vergeire, Health Assistant Secretary said on her GMA News Unang Balita Interview:

READ: 10 FACTS ABOUT CORONA VIRUS TO FILIPINOS IN KOREA

In addition, although no travel ban has been placed, DFA has asked Filipinos who wish to travel to the country to delay their visit.

South Korea has seen an increased number of cases lately after a series of infections happened in one religious sector in Daegu just last week. In addition, high cluster of infections have also been seen in a hospital in Cheongdo.

In fact, South Korean President Moon Jae In said that the government has now raised its alert level on Covid 19 to the highest because of these incidents.

As of Monday, confirmed corona virus cases has jumped to 763 and already, 7 deaths from the infection since the January outbreak.

For Filipinos (including undocumented migrants) who need to contact the Philippine Embassy in South Korea in cases of emergency, you may contact them at (+82) 10-9263-8119.