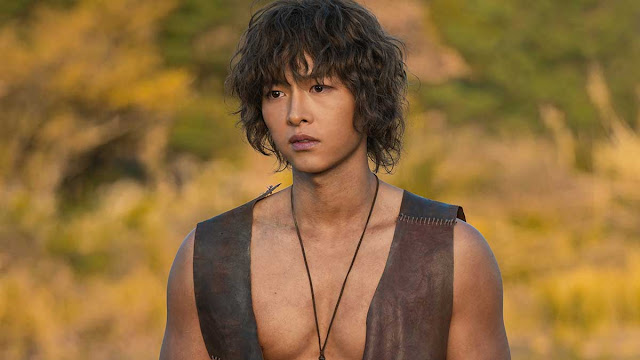 To see your culture being appreciated by another culture makes you proud to be Filipino. That is what the Korean entertainment industry just did with "Arthdal Chronicles."

The Korean entertainment scene has seen a lot of success over the decades. From the first Hallyu wave of korean dramas and films, to the recent boom of K-Pop thanks to groups like BTS and Blackpink. No doubt their standard for creativity and quality has made them the one to watch in Asia.

This extends to their method of creating a story or a concept, especially in television and film. After months of research and writing, the story comes to fruition when it is filmed and shown to audiences. In the new Netflix drama "Arthdal Chronicles" the writers wanted to use a Filipino dialect in their fictional world.

For Filipino audiences, it was a big shock to see a familiar language, specifically Tausug and Yakan dialect, being spoken in a foreign drama. It is something to be proud of that a tiny bit of our culture has carried over to South Korea. However, what is even more suprising is how the dialect made it on screen.

One of the lines spoken by the Wabi character was " Kaunahan tara isa kuma-on. Iban binug-tubig." This was translated by Teodae, played by Yang Kyungwon, that the Wabi captive was asking for something to eat and drink.

It is all thanks to Seoul based Filipino Filmmaker and Actor Nash Ang who was part of the drama. He is the one who speaks up and asks his captors for water in Episode 9 of the "Arthdal Chronicles."

According to Nash, the production team asked him to translate some dialogues to dialects from the southern part of the Philippines. He shared that his family is originally from Mindanao and that they speak Tausug and Yakan (spoken mainly in Basilan). While it was the producers and writers who decided to have languages from Southeast Asia for the Iark tribes, it was Nash's efforts that pulled it all together.

His mother and relatives helped translate the lines, as noted on Inquirer, as the conversations in the scrip were deep. The Korean actors had to memorize the lines. Apart from appearing in the drama, he also helped the cast speak the dialect.

Watch the latest episodes of "Arthdal Chronicles" on Netflix. Will you be able to catch the Filipino dialects?