South Korea is known for having a fun night life where drinking with peers is a big part of it. Not only is it a time for socialization and stress-relieving, it is also a place to have fun and relax as well.


When you watch South Korean dramas, there are many instances that the characters go drinking together at some point. Given they aren't high school students or younger, the characters engage in conversation more comfortably when they're out drinking. This doesn't veer away from real life as it is part of South Korean culture to share a drink with a peer in a social gathering.

If you're new to their alcohol, here are 4 Korean Alcoholic drinks worth trying during a visit to South Korea.

Soju is a refined rice wine close to the likes of gin or vodka. It is clean to the taste and comes in a variety of flavors. This drink is usually paired with meat and a dinner meal. It has a very high alcohol content and tends to give hangovers.

Tip: Know some basic korean drinking manners when you serve your friends.

Rice Wine, also known as makgeolli, is a milky and lightly sparkling rice wine has a slight viscosity. It usually tastes slightly sweet, tangy, bitter, and astringent. This is best consumed fresh, or two after it was brewed, for a refreshing taste. Locals like drinking this with meals or with snacks.


This is a sweet dessert wine made from a wild blackberry that is native to South Korea. Plum wine, also known as Bokbunja-ju, is made by fermenting the berries in water. Some varieties include rice and jicho herb as well.

Beer is a favorite past time for many, especially since it can be drank as a pair to chicken. There is even a term chi-maek, an abbreviation of chicken and maek ju (also known as beer). Many locals love drinking draft beer in pubs with friends. This is a great beverage to drink with snacks.

Tip: Try mixing some drinks with beer. Drop a shot of soju into the mug of beer to make a soju bomb.

You can now try these drinks on your next trip to South Korea, just make sure to drink moderately too! 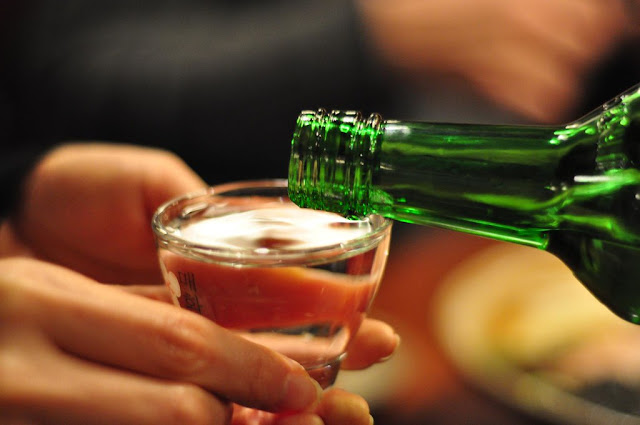