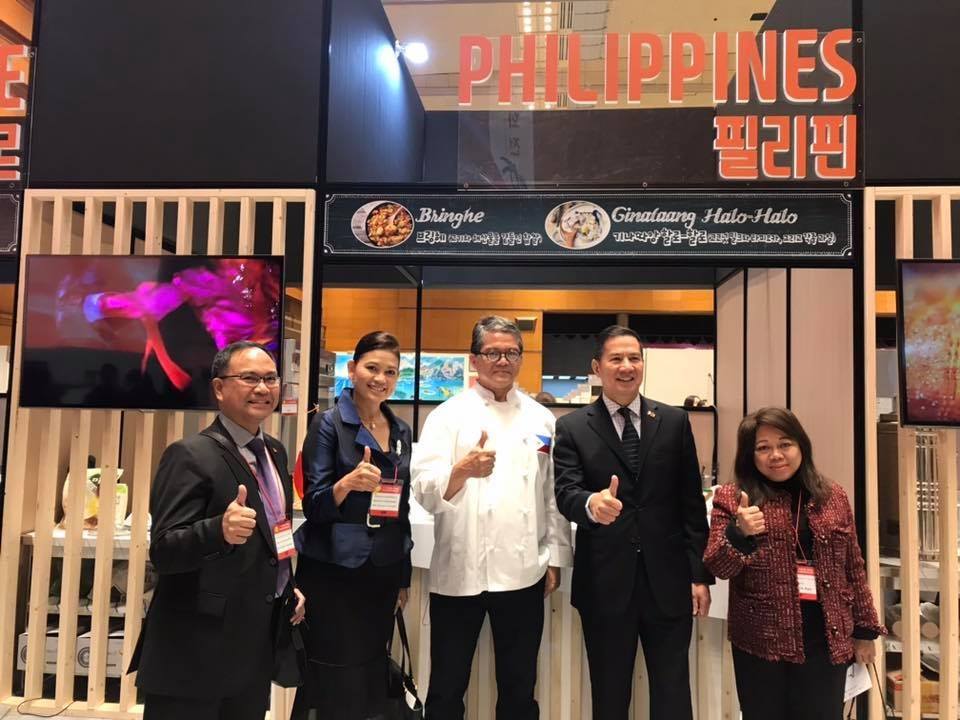 SEOUL, 12 December 2018 – Food from the Philippines and other ASEAN member states were once again showcased at the 2018 ASEAN Culinary Festival which was held from 28 November to 01 December at COEX Hall in Seoul.

The annual fair is organized by the ASEAN-Korea Centre (AKC) in order to allow the Korean public to experience for themselves the culinary traditions and food products of the 10 ASEAN member states.

This year’s ASEAN Culinary Festival focused on a variety of dishes that are primarily made of rice, such as Na Gyi Thoke from Myanmar, Nasi Katok from Brunei, and Sack Kor Ang Jangkak from Cambodia, and effectively showed how a common ingredient could be recreated differently to suit diverse tastes and cultures.

Chefs from the ASEAN member states were invited to the festival to promote their respective country’s food and bring out the distinct and traditional flavors of each country. The Philippines was represented by celebrated Filipino chef and restaurateur, Claude Tayag.

Chef Claude, who is known for elevating Kapampangan cuisine in the country through his restaurant Bale Dutung, prepared Bringhe, Philippines’ native paella cooked in coconut milk and colored with turmeric, and Ginataang Halo-Halo, a Filipino dessert that makes use of glutinous rice balls, coconut milk, and tropical fruits such as jackfruit and bananas. 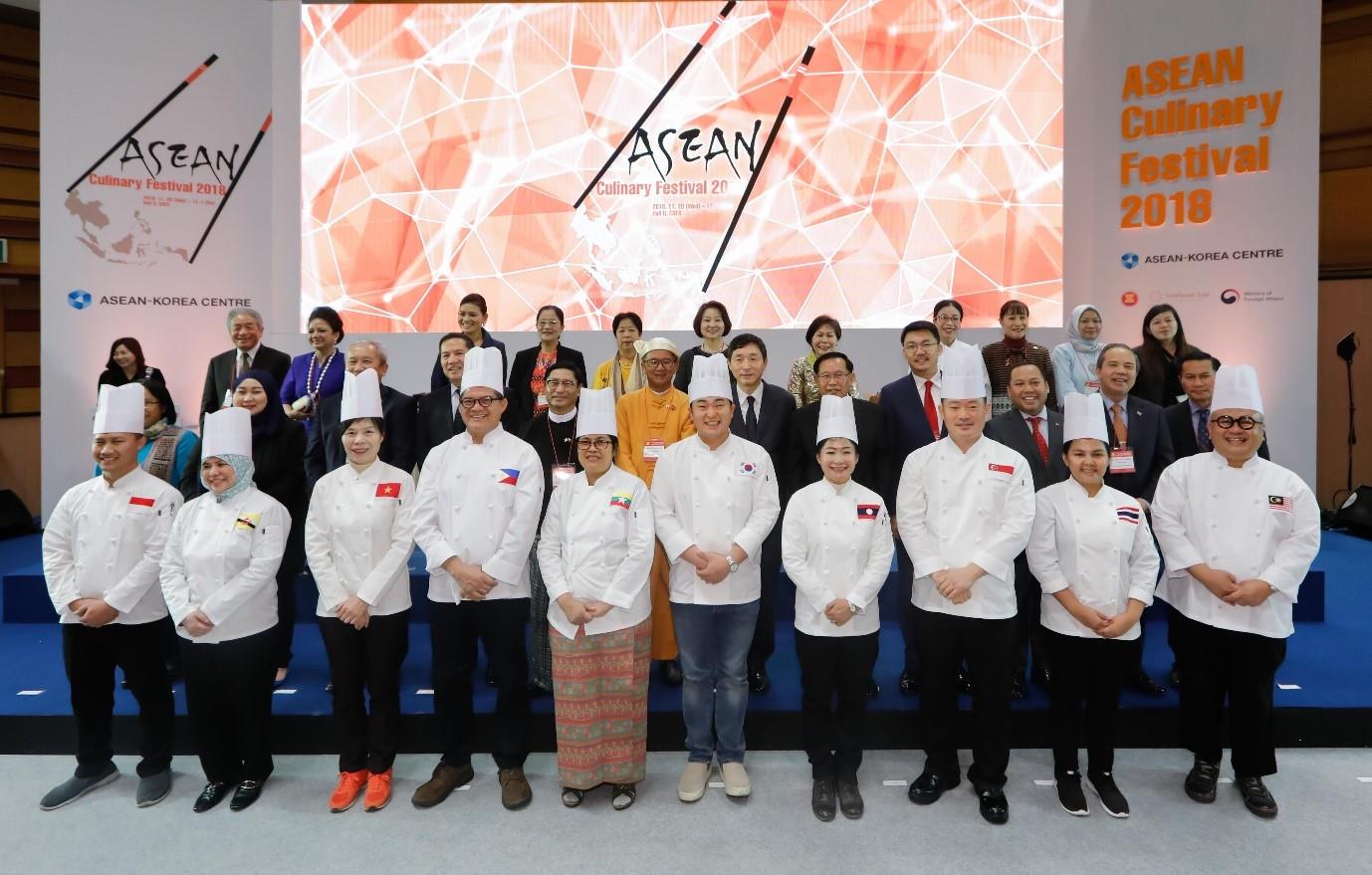 Philippine Ambassador to South Korea Raul S. Hernandez, who attended the opening ceremony with other ASEAN ambassadors, thanked the Filipino participants for joining the festival as a way to highlight the Philippines as a major food destination in the region and familiarize the Korean public with Philippine food.

AKC Secretary General Lee Hyuk also underscored the power of traditional cuisine to promote travel within the region. “Invest time in ASEAN food and get inspired to plan a trip to the ASEAN region,” he said in his opening remarks.

To complement the diverse selection of food served at the festival, and to further inspire guests to travel to the ASEAN region, traditional performances from the ASEAN member states were featured throughout the two-day event. 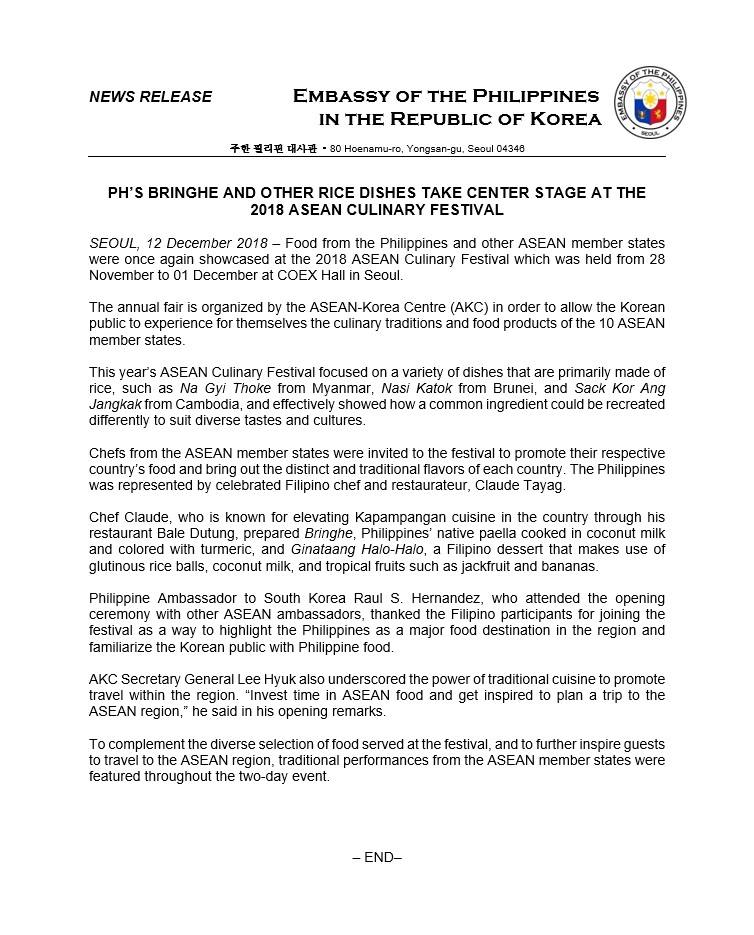