Filipino Mockumentary Film wins in a Film Festival in Korea

ULSAN, KOREA - Filipinos are rejoicing once again as "No Man is An Island" received the Special Jury Award on the Ulsan New Media Film Festival 2018 on September 29, 2018 in Ulsan, South Korea.

"Pangarap ko lang na makita sa pelikula o malaman ang pakiramdam ng isang artista. Nawa ay magbukas ito ng mas marami pang opurtunidad at magsilbing inspirasyon sa lahat ng mga kabataan at kapwa Pilipino. (It was only my dream to see myself on the big screen and how is it like to be a film actor. I hope this will open for more opportunities and will serve as an inspiration to the youth and fellow Filipinos." said Roderick Alo, one of the main actors of the said Film and artist who is working in the Philippine theater industry for more than 20 years. 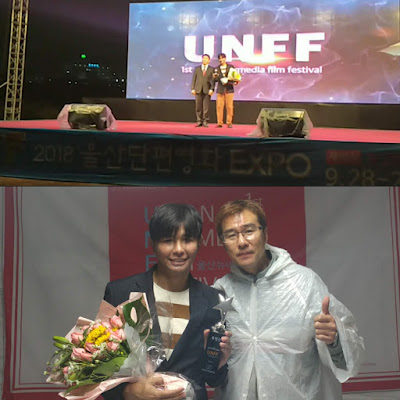 Nash Ang, the director of the film, receives the award on September 29.

"No Man is An Island" is a 15-minute mockumentary cut of a film about a muslim terrorist group to behead two Korean tourists; a cult leader and a sex tourist. The original film is a thirty five-minute one shot movie using a smartphone; a fake documentary that presents how both terrorism and fraud religion manipulate the people for material and ideological aims.

Ulsan New Media Film Festival (UNFF, 울산 뉴미디어 영화제) is the first film festival organized by the local government of Ulsan. The festival aims to promote the industrialization of Ulsan Metropolitan City by concentrating on new media films such as experimental, virtual reality and films that uses the latest technology in a creative way.