Ryan Bang determined to promote PyeongChang 2018 in the Philippines

0 0 Nash Ang Friday, January 19, 2018 Edit this post
In South Korea he is virtually unknown, but in the Philippines he is a national star.

Bang Hyun-sung, better known as Ryan Bang, is a South Korean entertainer who made his name in the Philippines. He is currently a host of popular Philippines variety show "It's Show Time."

Since he made his debut in the Philippine entertainment industry in 2010, Bang has visited South Korea on various occasions, but this month he had an unforgettable experience in his homeland: appearing on South Korea's top entertainment show "Infinite Challenge" with legendary Filipino boxer Manny Pacquiao. 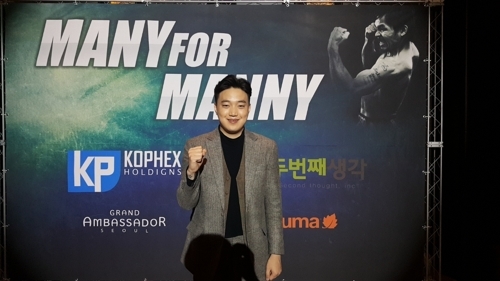 In this photo provided by Second Thought, South Korean entertainer Ryan Bang poses for a photo at an event for Filipino boxer Manny Pacquiao in Seoul on Dec. 26, 2017. (Yonhap)

Even though his role was a translator for Pacquiao, Bang said it was still a huge honor for him.

"As a South Korean, I felt very honored to entertain fans on South Korea's top show," Bang said to Yonhap News Agency on Tuesday. "It was also an honor for me to appear on the show with Filipino senator and boxer Pacquiao."

Bang said one of his New Year's resolutions is to promote South Korea and the PyeongChang Winter Games. The 26-year-old was recently named honorary ambassador to promote Gangwon Province where the 2018 Winter Games host cities PyeongChang, Gangneung and Jeongseon are located.

"I'm sure all South Koreans in the Philippines will do the same, but I will do my best to promote the PyeongChang Olympic and Paralympic Games," he said. "Gangwon Province is the top tourist spot in South Korea. I want to get foreign tourists to visit the province even after the Winter Games."

Bang is already known as an avid promoter of South Korea through his television programs. One of his previous segments was even called "Annyeonghaseyo," meaning hello in Korean.

"At least I promoted what 'Annyeonghaseyo' means," he said. "I will keep working hard to promote my home country."

If he gets the opportunity, Bang said he also wants to make his name in the South Korean entertainment industry.

"My mother and relatives want to see me appear on South Korean shows," he said. "If I get a chance, I want to entertain fans in South Korea, too." (Yonhap)