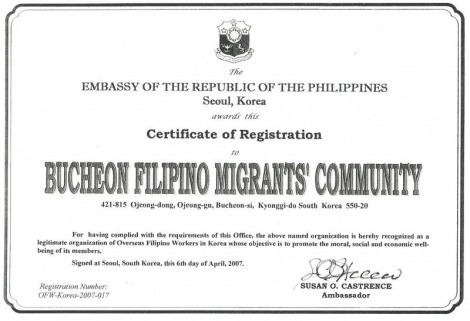 Several years ago, some Filipinos migrated in Ojeong-Dong, Bucheon City, South Korea. Our Christian brothers headed by Mr. George C. Manalo BFMC President (2006-2007), and his officers Mr. Celso C. Andal, BFMC President (2007-2009), Mr. Ricardo P. Magnaye, BFMC Sports and Social Affairs, (2006-2007), Romeo F. Robles BFMC Sports and Social Affairs (2006-2007) and Justice and Order (2007-2009), Glenn Maningas Sports and Social Affairs (2006-2007) established an organization called "Samahan ng mga Pilipino sa Bucheon." Two years later, they held a meeting together with Juvy Oh a succesful businesswoman, with the aim to request a Catholic Mass for Filipinos here in Ojeong-dong Catholic Church because of their spiritual thirst. "The Bucheon Migrant Workers House" supported them together with some of our brothers and sisters too. On May 21, 2006 the first mass was held. It was celebrated by our beloved Rev. Fr. Glenn Giovanne Jaron MSP, Rev. Fr. Adam Bede Lasmarias, OSA and Sr. Eulalia Tome, FHGS. There were about 300 Filipinos attended the first mass. Right after the mass, the first meeting was held. The agenda of the meeting were the orientation of by Laws and the election of church officers. Everybody was happy and blessed on that wonderful day!. That was how "Bucheon Filipino Migrants Community" originated and established.