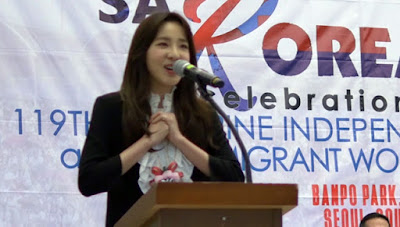 The Filipino Community in South Korea conducted an early celebration of the 119th Independence Day of the Philippines in Banpo Bridge in Seoul, South Korea yesterday, 11th of June, 2017. Dubbed as Bayanihan 2017, the event was full of performances from our Kababayans in Korea and other artists from the Philippines.

There are singers who serenaded the crowd, there are group of dancers who showcased the Filipino culture and there are other artists who represents the country through their own creative way. There are also food stalls with yummy Filipino dishes.

One of the highlights of the program was the speech of the "Pambansang Krungkrung ng Pilipinas", Sandara Park. Also known as her stage name "Dara" of 2NE1, the South Korean singer, actress and host gave a wonderful message to her Filipino fans.

Here'a a part of her message


...joyfully and sincerely, commit myself to keep on representing and promoting the diverse beauties of the Philippines... Philippines will always be special to me. Maraming salamat! Mabuhay at mahal ko kayo! Gamsahamnida. 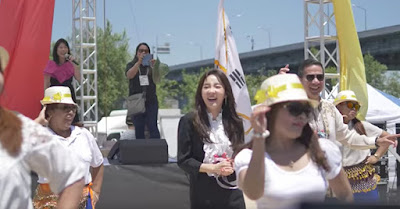 Sandara Park or Dara of 2NE1 started her career in the Philippines after she became a runner-up in Star Circle Quest, a reality-based talent search show of ABS-CBN. She then joined the talent arm of the said TV network and instantly gained the hearts of the Filipinos.