Cultural understanding is key to multicultural marriages, says Justice Francisco P. Acosta, the chief of the Commission on Filipinos Overseas. 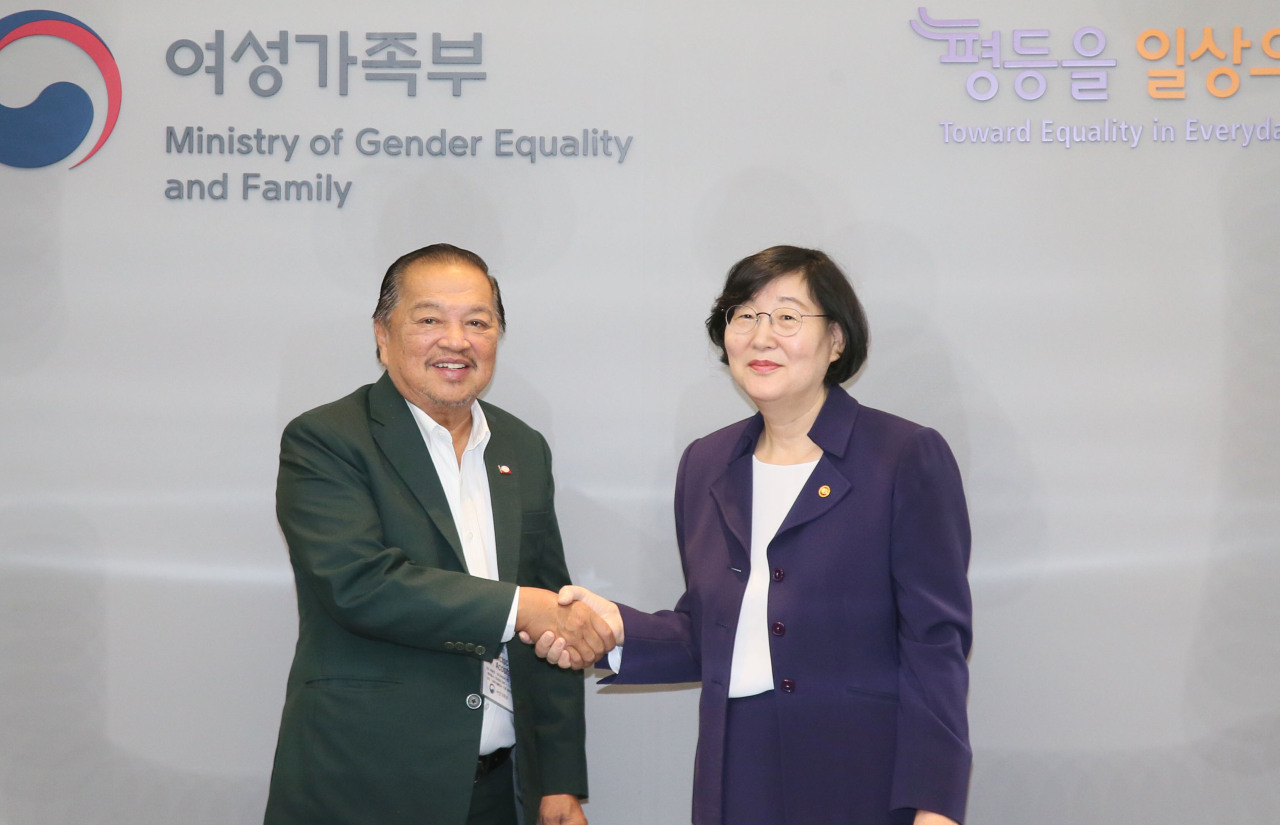 The Commission on Filipinos Overseas, a presidential commission based in the Philippines, is working with Seoul’s Ministry of Gender Equality and Family to protect rights of Filipino marriage migrants in South Korea.

Speaking to The Korea Herald after a closed door meeting with the Gender Ministry in Seoul on Friday, Acosta emphasized the need for cultural understanding in multicultural marriages.

Justice Francisco P. Acosta of the Commission on Filipinos Overseas and Gender Minister Lee Jung-ok pose for a photo at the Seoul Government Complex on Friday. (Gender Ministry)

“As we all know very well, marriage itself is a very complicated relationship, even between two people of the same nationality,” he said, saying “a mutual effort for developing cultural understanding” is key in a multicultural marriage.

“Extra effort is needed in an interracial, intercultural one in order for it to be successful.”

The Philippine agency and Seoul’s Gender Ministry signed a memorandum of understanding in March 2012 establishing a channel for collaboration to assist the growing Filipino marriage migrant population here. A large number of women, in particular, come here as marriage migrants.

According to government data, out of 27,945 Filipinas who were staying in Korea, 10,598 were marriage migrants.

To help the migrants integrate into an unfamiliar cultural setting, the ministry and the agency jointly operate pre-immigration centers in Manila and Cebu, which offer seminars on Korea’s language, culture and legal system. Of the 852 Filipina marriage migrants who came to Korea in 2018, 787 had taken the program, according to the ministry.

Another goal of Acosta’s visit to Seoul, he said, is to establish a support network for second- and third-generation Korean-Filipino children.

The agency runs a two-week cultural immersion program called Youth Leaders in the Diaspora for children of Filipino migrants, with the goal of helping them understand their heritage.

“The program allows the children abroad an opportunity to experience different aspects of Filipino life and learn about the culture,” he said.

Acosta said he believes migration between the two countries has improved relations between Korea and the Philippines.

“Marriage is a mixture of two cultures at a most personal level,” he said.

Asked if he had a message for Filipinos in Korea, Acosta said the agency “will continue dialogue and engagement with our Filipinos here.”

“The agency will work with the Korean government to formulate and monitor polices that will benefit our migrants.”

To Koreans, he said he hopes the people of both countries will respect each other as “fraternal brothers and sisters” in an increasingly globalized world.

“We live in an era of globalization. Hopefully, we will soon be living in a borderless world where migration is a matter of course,” Acosta said.

“In a perfect world, nationality will be obsolete and we will live not as Filipinos or Koreans but as citizens of the world, free of barriers.”

At the Friday meeting, Gender Minister Lee Jung-ok said the government welcomes migrant women from the Philippines, as well as those from other cultural backgrounds, as members of society, and promised active support to improve their lives here.